A few weeks ago Connor started swimming lessons at our local YMCA! The lessons are for 30 minutes every Saturday and runs for a total of 10 weeks. 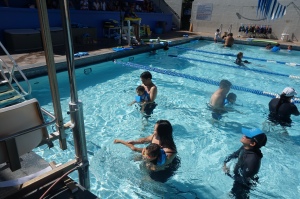 Connor is in the Parent/Tot class, which is designed for children 6 to 35 months of age. The classes are conducted with the parent in the water with the child.   Most of the activities are done to well known nursery rhymes (humpty dumpty) or songs (wheels on the bus, hokey pokey).

During this 10 week session, there are a total of 5 children (including Connor) in the class.  Although children could be as young as a 6 months, Connor happened to be the youngest one in his class. Connor sure acts like the youngest one as well. While all the others were having fun playing in the water, my poor son just complained and cried for I’d say 80-90% of the 30 minute lesson. The only time he stopped crying was the few minutes of “free time” at the end of the lesson where he got to play with the floating toys in the water. Of course, Connor grabbed onto two balls and wouldn’t let them go until he got out of the water.

Overall, the class was very well-organized.  I just wish Connor enjoyed it a little more.   Everett thinks that Connor is fussy because he doesn’t like the blue floatation device that he’s required to wear and because the swim lessons are at a bad time (the class is during the time  at which Connor usually takes his morning nap).  I too wish the class was earlier in the morning.  Unfortunately, our class is the only Parent/Tot class they have on Saturdays.  I am hoping that as we keep going to these lessons, Connor will get more used to the water and will actually start playing and enjoying the water.  Otherwise, it’s going to be a long 10 weeks!