After finding out that Yokohama had a ramen museum, we figured that no Ramen Tour through Japan would be complete without a visit.  The Shin-Yokohama Ramen Museum boasts being the world’s first “food-themed amusement park.”  In reality, it was just a bunch of ramen restaurants in one place that charges admission. 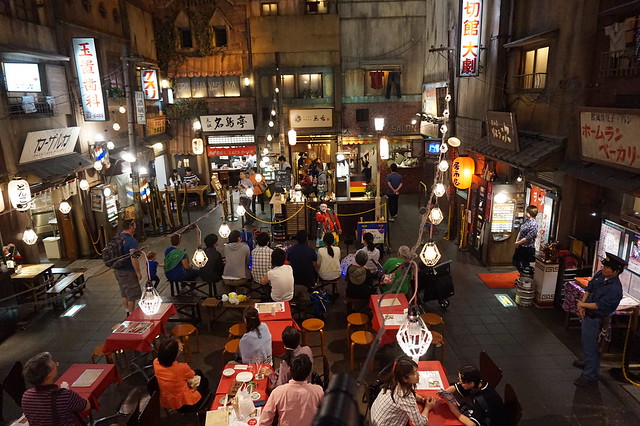 Although the first floor did have a small museum and gift shop, the highlight of the museum was the two basement floors that were modelled after the streets of Shitamachi, an old town in Tokyo in the year of 1958, the year that instant ramen was supposedly invented.  The two floors collectively showcased a total of 9 ramen restaurants that each featured ramen from a different region of Japan. 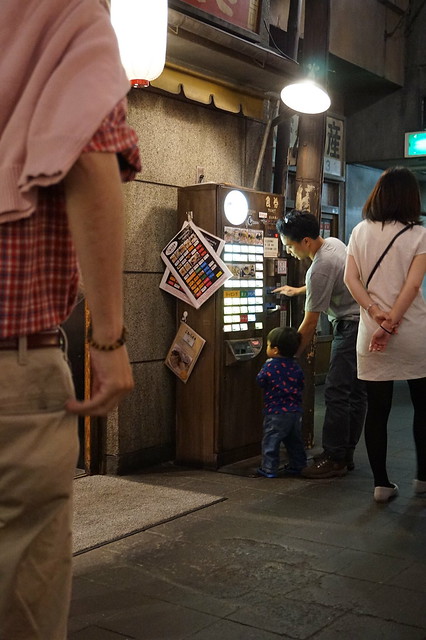 I originally thought that the ramen museum was like a  food court, where we would each be able to buy ramen from a separate restaurant, take them out, and eat together in the tables in the courtyard.  Unfortunately, we learned that each restaurant was independent, and we weren’t able to take the ramen out of each restaurant.  It was also disappointing that each person had to buy a bowl at each restaurant, so we all had to decide on one place to eat together, or pick different places and eat alone. 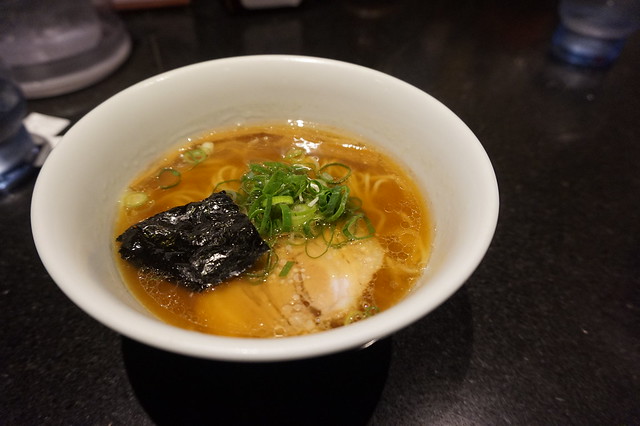 Ev and I decided to eat at Shina Soba-ya, which had a chicken shoyu base ramen.  I thought that we made the right choice because I was still full from lunch and this ramen’s was not overly heavy or oily.

Overall, I was really disappointed in the ramen museum.  There are so many great ramen shops in Japan that I wouldn’t recommend going out of your way to go here unless you’re already in Yokohama. 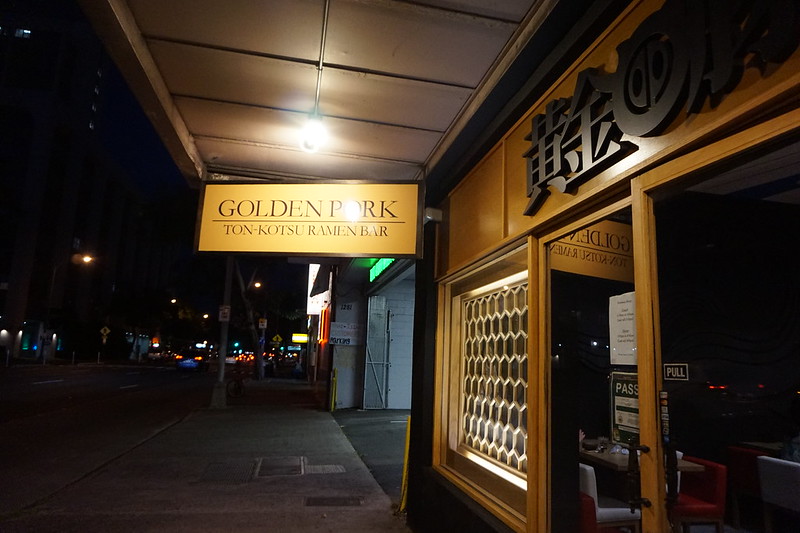 Ev and I are always on the lookout for new ramen spots, so we were excited to hear that Golden Pork Tonkotsu Ramen Bar opened on King Street. So, a few months ago (yes, I’m a little behind with this post) when we were lazy and didn’t want to cook, we decided to take Ev’s parents to eat at Golden Pork.  When we got there, all the tables were taken so we had to wait outside for about 10 minutes before a table opened up. 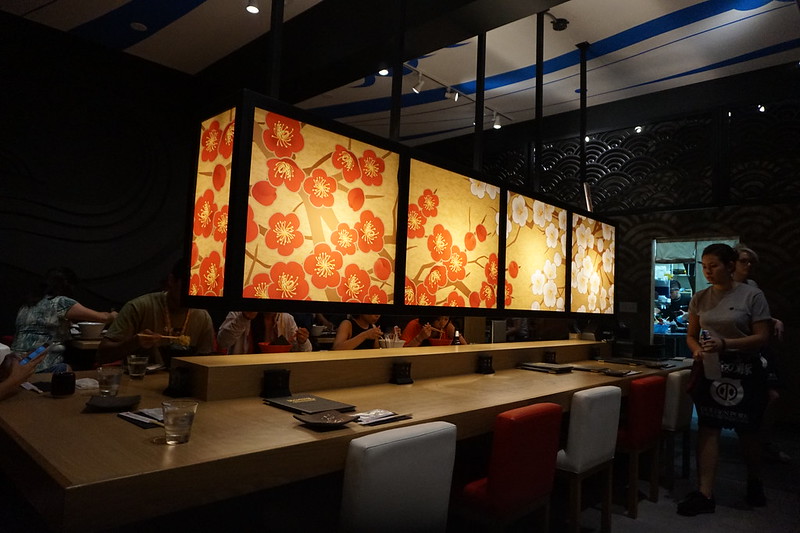 Ev has a theory that if the restaurant decor is too put together, it must be a chain or franchise. As soon as he stepped into this restaurant, he declared that this restaurant must be a chain because the interior design was much too nice to be a mom and pop restaurant.  I searched the internet, and while it doesn’t look like there are any other Golden Pork restaurants out there, the Golden Pork is owned by IKKA Dining International, a subsidiary of IKKA Dining Project, a Japanese company that apparently owns 21 restaurants.  So, I guess Ev was sort-of right this time. 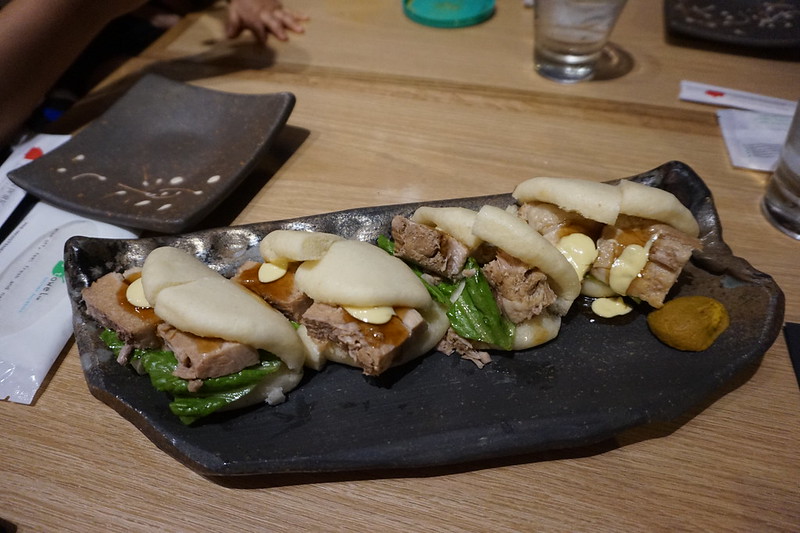 We started our meal with Golden Pork Buns, which consisted of a steamed bun and pork rib dressed with lettuce, a dollop of mayonnaise and hot mustard ($3.50 each). At first, I was a little concerned about the amount of mustard, but it was surprisingly not as hot as I thought it was going to be. The bun was also a bit dry. 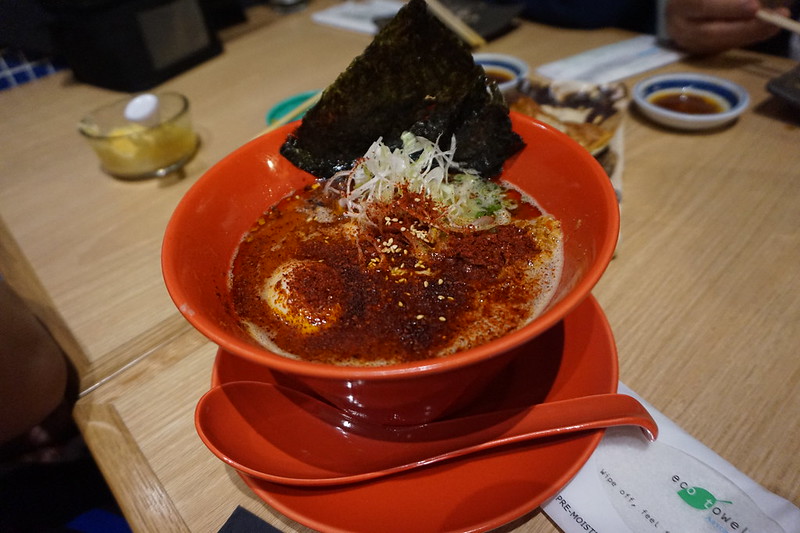 I decided to order the Spicy Red Miso Dragon Ton-Kotsu Ramen ($10.50).   The Ton-Kotsu ramen came with very thin cut noodles (almost like somen noodles), which was very unique.  I got the medium spiciness (Level 2), which may have been a tad too spicy for me.  While I was able to finish the bowl, I recall saying “Woah, this is spicy” at least a few times during my meal.  I can’t imagine how spicy Level 3 would be. 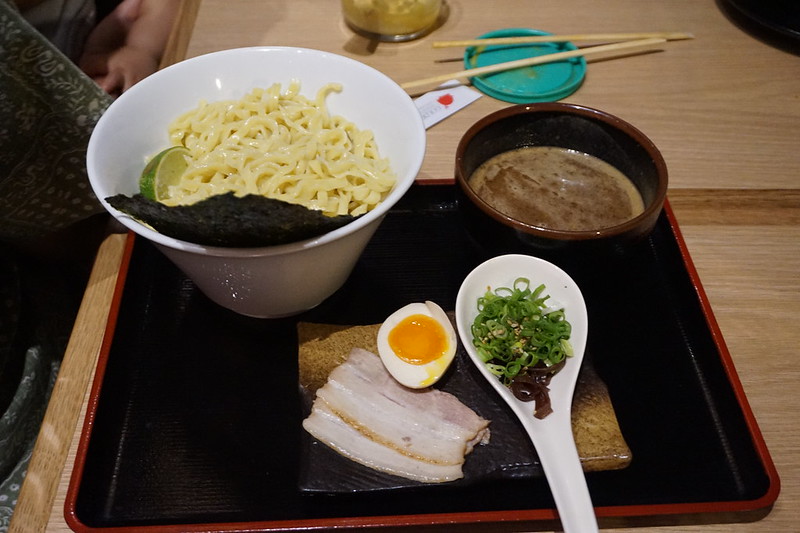 Ev ordered the Black Garlic Tsukemen with extra noodles ($11.50 + $1.50).  The noodles in the Tsukemen were very think in contrast to the very thin Ton-Kotsu ramen noodles.  The portion sizes were very good here because Ev clearly didn’t need the extra noodles.  He ended up not finishing his meal.

Overall, Golden Pork was good but I think there are other ramen places in the Honolulu area that are just as good and have less of a wait time.  However, the food was tasty enough that I’m sure we’ll be back.  Also, I was a little disappointed that they didn’t have a highchair for Connor.  Eating hot ramen with a squirming baby in your lap is not easy and I don’t recommend it.  Ev and I ended up having to take turns eating while the other kept Connor busy.