Ev and I pass Japanese BBQ Restaurant Yoshi on the way to work every morning, and I’ve been wanting to eat there for some time now. So, a few weeks ago when my mom was over and we were trying to figure out what to do for dinner, I suggested Japanese BBQ Yoshi. 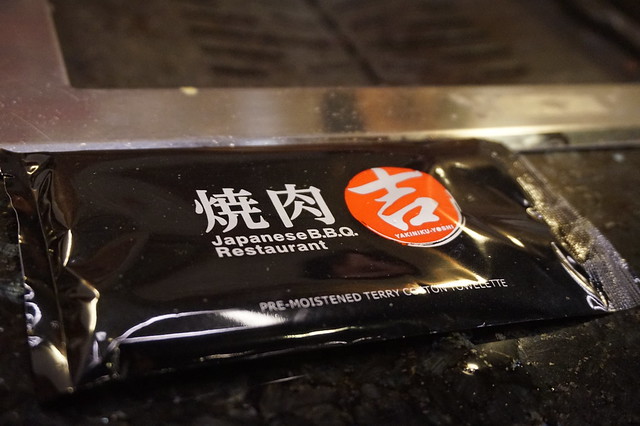 Located in the lot next to Krazy Karaoke on Young Street, Japanese BBQ Yoshi had a pretty extensive menu of different cuts of beef,  as well as some poultry and seafood.  Because we had no idea what we were doing, the server suggested that we order one of the set menus (for two people) which has a little bit of everything the restaurant has to offer.  Since there were three of us, we decided to split the premium set menu ($140) and an additional side dish to start.  We figured that if we needed more food, we could at some point order additional food ala carte. However, the set meal ended up being so much food that we ended up not having to order anything else. 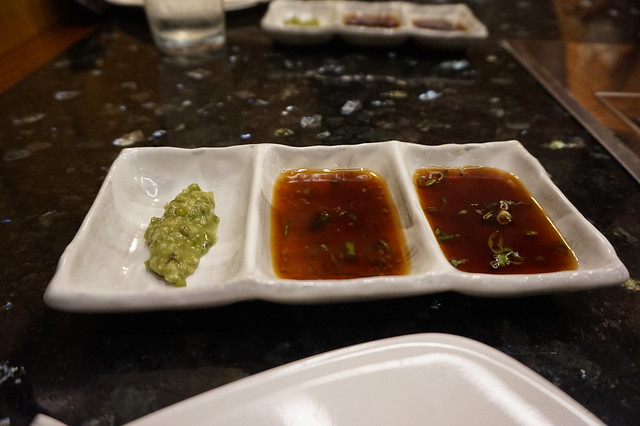 I normally don’t take pictures of the condiments, but I made an exception here because their sauces were so good. In additional to a teriyaki and a sweet ponzu dipping sauces, they also served grated wasabi. I love real wasabi, and it was a really nice touch. 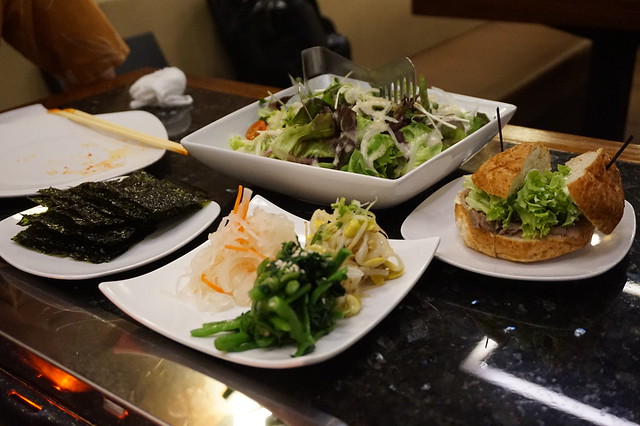 The meal started with a nice organic salad, Korean nori, three types of namul (pickled radish, daikon and carrot, choy sum, and bean sprout), and a toro sandwich.  The salad was good and the namul was fine.  The toro sandwich was ok in itself, but a little odd to eat at dinner and the Korean nori appeared to be Korean nori straight from the package.  I didn’t think that the toro sandwich or the nori contributed much to the meal so its inclusion in the set menu was a bit strange to me. 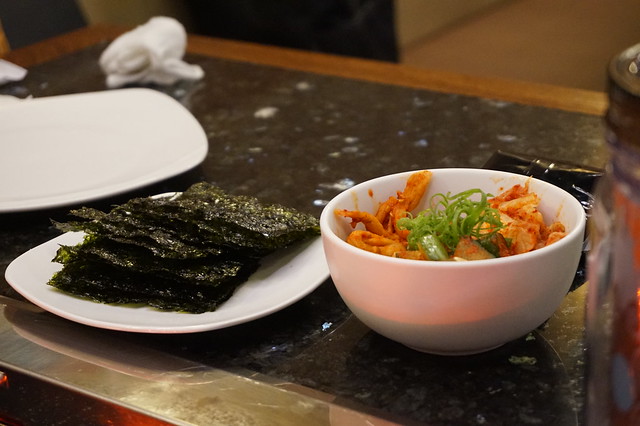 Shortly thereafter, the server brought out a bowl of kim chee, which was very good.  Ev liked this kim chee a lot. 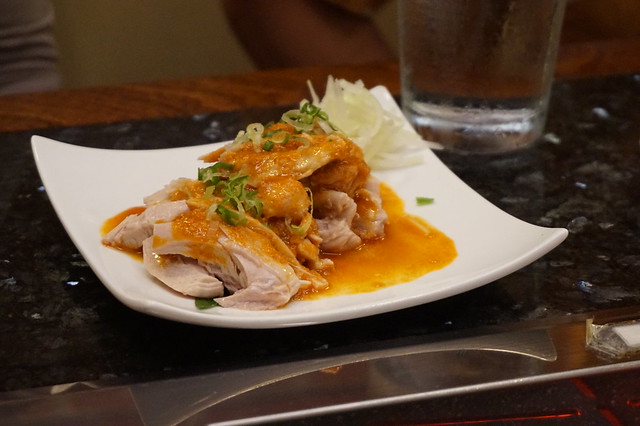 Next came the one dish we purchased outside of the set menu.  I think it was called jidori chicken.  I thought the chicken was very moist and the sauce was tasty. 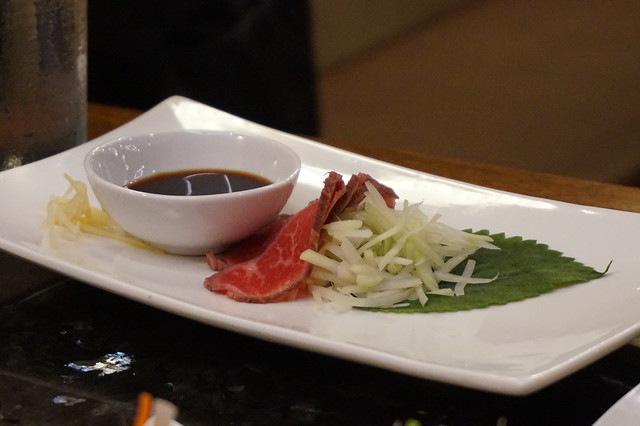 Next, the server brought out Beef tataki with green papaya, ginger, shiso, and shoyu.  At the same time, we also received 4 shrimp in a cute pan of garlic butter (not shown).  When ordering we had a choice between the shrimp and scallops.  We decided on the shrimp because my mom loves shrimp.  The shrimp were a good size and well seasoned.  Also around this time, we also received a bowl of wakame soup (not pictured) which was ok, but nothing special. 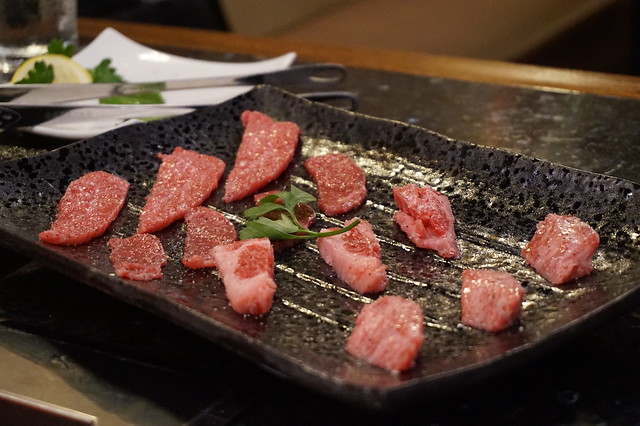 Beef sampler of four different cuts of beef.  Although the slices of beef were small, all of them were tasty.  I particularly liked the ones on the far right, which had a nice marbling of fat and practically melted in your mouth. Yum! 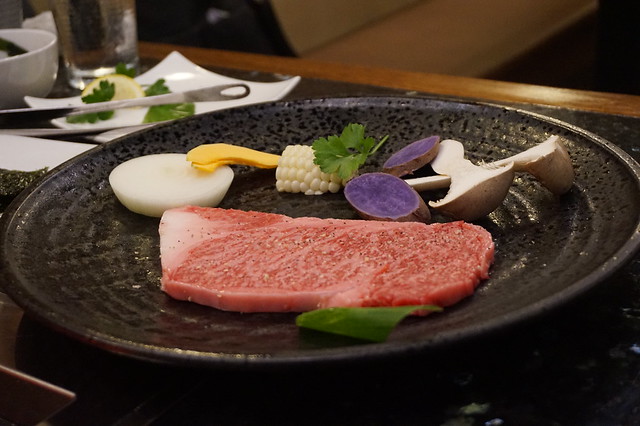 The next course was the wagyu steak, which was definitely the highlight of the meal.  Just look at that marbling.   For the price of this set, I thought we got a decent amount of beef here. The meat also came with a small assortment of vegetables (onion, corn, pumpkin, Okinawan potato, and mushroom) which were also cooked on the grill, but obviously, no one was talking about the vegetables when we ate this course. 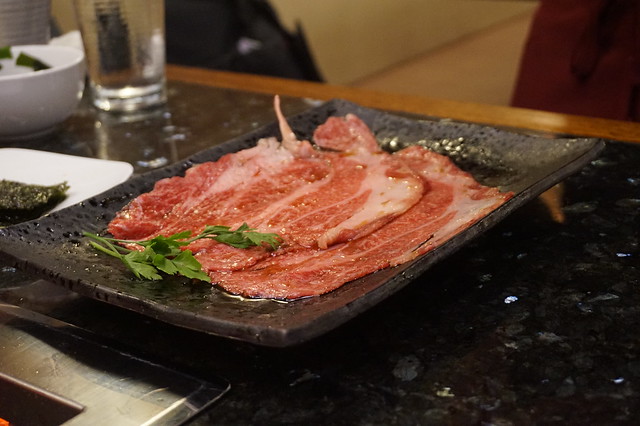 Next came the Sukyaki beef which was served with yamaimo and a raw egg. According to our server, you were supposed to lightly cook the beef and then dip it in the yamaimo and raw egg mixture. I tried the method once but didn’t care for it so I ate the rest of my meat with the dipping sauces shown above. I thought the yamaimo egg mixture just made the meat slimy. 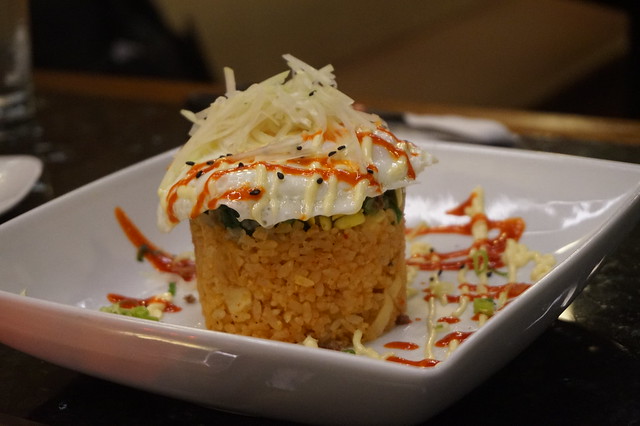 Our final entrée of the night was a bibimbap. We had a choice of either a bibimbap or a noodle of the day, which I think happened to be ramen that day.  Since my mom was with us, we decided to get the bibimbap since it was easier to share between the three of us.  I’m not sure whether it was because we were already full by the time the bibimbap came or if just nothing special, but we didn’t end up finishing this course and no one volunteered to take it home.

I apparently also forgot to take a picture of the meal’s dessert, which was three mochi icecream pieces (strawberry, chocolate, and green tea) and slices of fresh fruit.  I was also glad that my mom was with us because it would have been too much food to eat if it were just the two of us.  By the time we finished dessert, we were all really stuffed.

Japanese BBQ Restaurant Yoshi looks very modest from the outside. Passing this restaurant all these months, I would have never guessed that this restaurant would be serving such premium cuts of A5 Miyazaki wagyu beef. For the three of us we ended up spending about $200 after tax and tip. While the meal wasn’t cheap, the quality of the meat was much better than the cheaper yakiniku places such as Gyu-Kaku or 678. A number of people compare this restaurant to Yakiniku Hiroshi, but unfortunately I have never been there so I am unable to compare the two. Obviously, unless you are rolling in money, this is not a restaurant that you can go to every day. But, still it’s an enjoyable place to go once in a while when you want to splurge on something nice.