I received my box last week and wrote an almost finished blog post about it.  As I was proofreading, my computer decided to do an automatic update on me and my computer restarted.  I lost the entire post.  I was so mad that I’ve been putting the rewrite of this post off for days. I actually debated rewriting this post at all because it was, unfortunately, a less than spectacular box.  But, I already took the time to crop and upload the pictures and I didn’t want all that time to go to waste, so here is my third stitch fix box.

For those of you who aren’t familiar with Stitch Fix, its a personal shopper service that mails five articles of clothing to you to try on.  Keep what you like, return anything you don’t.  You can read a more detailed description about the service on my previous two blog posts – Stich Fix Box #1 and Stitch Fix Box #2.

Now on to my box!

The first item in my box was a Uttam Jax Sleevless Lace Jaquard V-Neck Dress ($88).

Of the five pieces in this box, this piece fit my style the best.  Unfortunately, the fit was not right at all.  The torso was too long, which made the middle of the dress bubble out.  The waist was to tight and the darts did flatter my body type.  Verdict: RETURNED.

The second item in my box was a Daniel Rainn Catalina Blouse ($68). 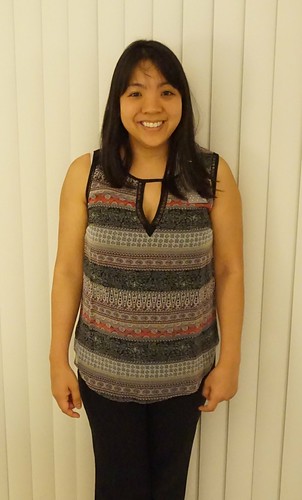 I was never a fan of the peekaboo keyhole and I was not a fan of this blouse.  Also, only the front of the blouse was lined and without an inner shirt, the back was so sheer you could see right through the blouse – bra strap and all.  For $68, I feel like the both the back and the front should have have lining.  Verdict: RETURNED.

The third item in my box was these Just Black Banks Skinny Jeans in Navy ($78).

These skinny jeans were the perfect length for me and surprisingly comfortable.  Too bad I already have a pair of skinny jeans and don’t have any need for these.  I was so disappointed to see these in my box because I specifically said that I was looking for clothes for work.  Skinny jeans are not appropriate work attire.  Verdict: RETURNED.

The fourth item in my box was a Daniel Rainn Valencia Lace Insert Blouse ($68), which is also shown in the picture above.  This blouse was ok but it just wasn’t my style.  It was also slightly too big, so I returned it.  Verdict: RETURNED.

Finally, the last item in my box was a Brixton Ivy Kinsey Seamed V-Neck Dress in Dark Pink ($88). 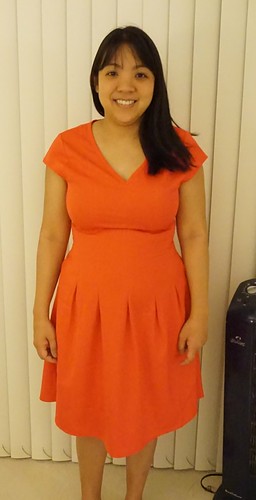 I did not like this dress at all.    Although it claimed that it was “dark pink”, the dress was bright pink.  The fit was all wrong, the darts made my hips look huge, and the hem was too long.  Verdict: RETURNED