A few weeks ago, Connor and his two cousins Kyla and Kristalyn visited the Waimanalo Country Farms for its Annual Fall Harvest & Pumpkin Patch, which is a festival held every weekend in the month of October.  The festival had a pumpkin patch, petting zoo, hayride, sunflower maze, games, country farm, food booth, and a lemonade and sweet tea stand.  It was my very first time going to a pumpkin patch.  The event was well organized, and not too busy.  Connor had a great time. 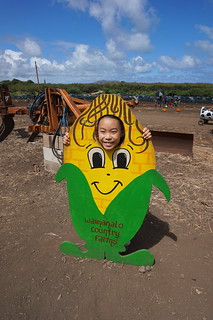 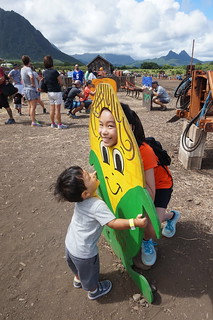 When we first got there, the first thing you should do is buy scripts.  Admission to the pumpkin patch itself was free, but pretty much all the other activities and food require purchasing scripts.  Overall, I thought the prices for the activities were pretty reasonable.  We ended up buying the $15 wristbands so we wouldn’t have to deal with so many scripts and pretty much ended up trying most of the activities.

Once we got our scripts and wristbands, we headed over to the “pumpkin patch” which was essentially a large dirt field with pumpkins spread around.  If you want to take home a nice pumpkin, I would recommend arriving early and going straight to the pumpkin patch as soon as you get there because once all the pumpkins are bought, they are gone. 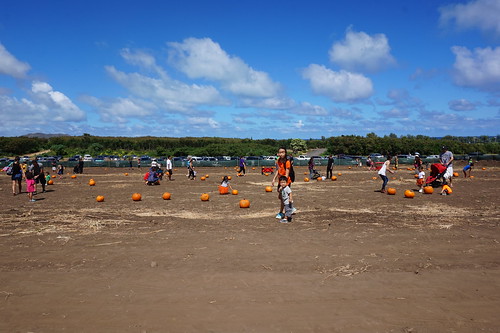 We arrived at the pumpkin patch in the early afternoon and by the time we got there the field probably had about a hundred pumpkins.  By the time we were leaving at around 4pm, there were only a handful of pumpkins left.  I’m guessing that the “refill” the pumpkin patch every day or at least every weekend because they still have two more weekends left.  The pumpkins were moderately priced, ranging from $2 to $20. 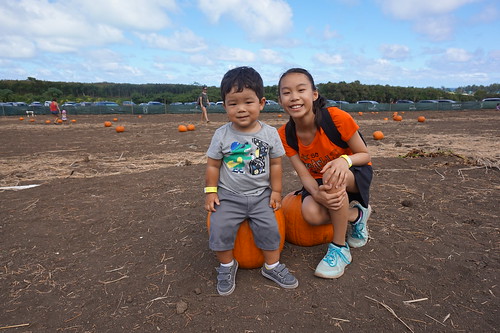 There were still some pretty nice sized pumpkins when we got there and most of the pumpkins would have been big enough to carve.  Connor really enjoyed running from pumpkin to pumpkin.  Connor tried to pick a few up but most were too heavy for him. 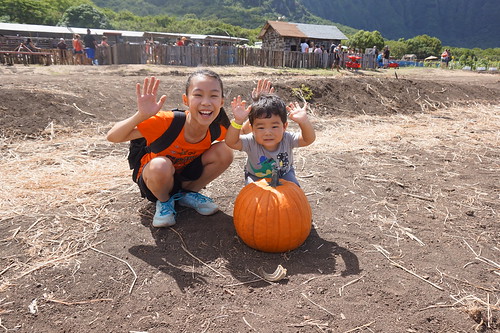 There were also a few places where pumpkins were piled together which made a really nice place for a photo op.  This was probably one of my favorite pictures of the day.  Fortunately, it wasn’t rainy and the dirt was dry.  I can imagine that this place would get pretty muddy if it started raining. I also don’t know why, but Connor started putting his hands up in the air when I asked him to smile.  🙂 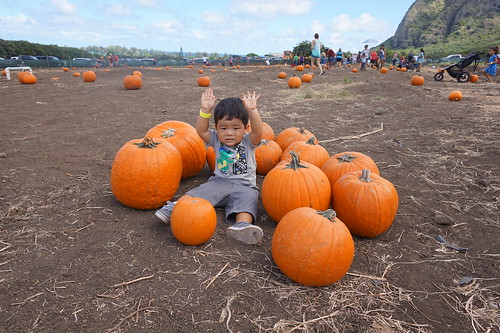 After Connor had his fill of the pumpkin patch, we moved on to the petting zoo.  When we were buying our scripts, I thought that the $6 per person admission for the petting zoo was a bit pricey, but it was actually well worth the price. 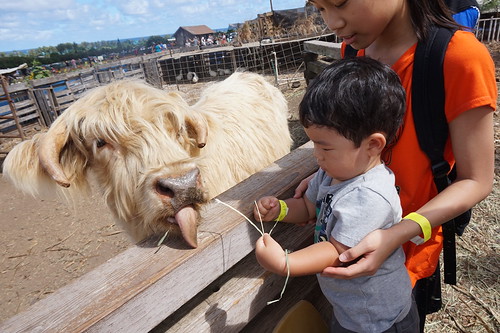 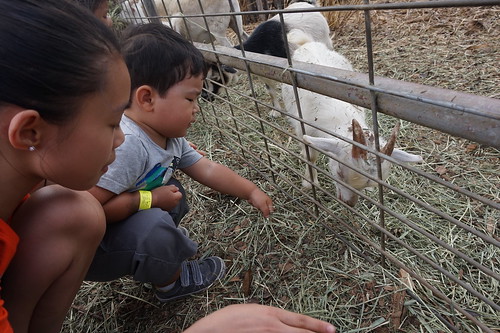 They also sold a large handful of feed, which you could use to feed the cows, goats, sheep, llamas, and donkeys, for a $1. Connor liked feeding the cows and the baby goats and sheep. 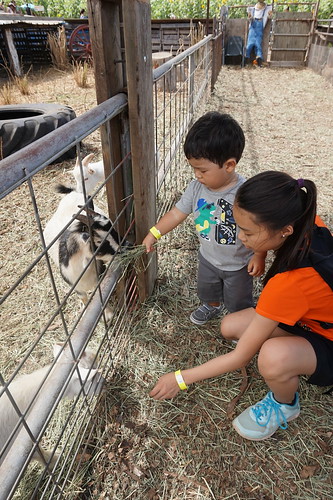 After the petting zoo, we walked through the Little Rascal Zone, which was a small game area for young children.  This activity was included with the wristband but would have cost $3 without it.  If we didn’t have the wristbands or were short on time, we could have probably skipped this activity. 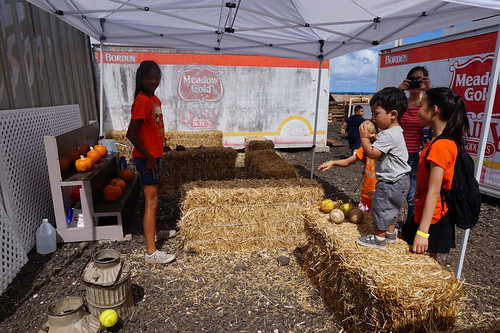 There were three games – a throw the ball in the milk jug game, a ring toss on a pumpkin game, and bean bag toss game.  Connor was a bit too little for these game and wasn’t able to throw the ball, rings, or bean bag far enough, but I think he still had fun trying.   I can’t see anyone spending $3 to play these games (there are no prizes), but at least it was “free” with the wristband. 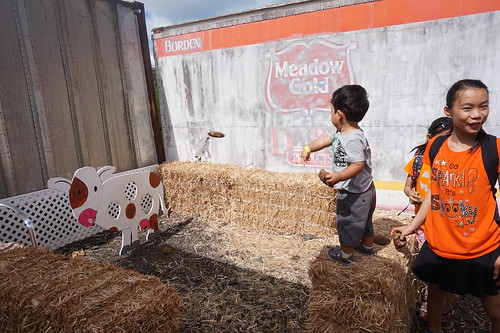 The longest line of the day was waiting for the hayride, where you got to sit on hay bales or benches in a large covered wagon pulled by a tractor. The ride was $3 per person but was free with the wristband.  We probably waited for about 20 minutes for the ride, but at least the waiting area was under a tent so we weren’t standing in the sun.  The Hayride was an approximately 15-minute educational tour about the farm given by the farm’s owner. 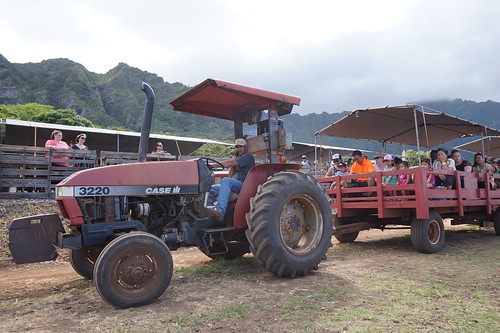 After we got off of the hayride, we immediately jumped on the “cow train” because there was no line.  The cow train was essentially a tractor that pulls a line of golf carts and small cow painted wagons for up to two children. 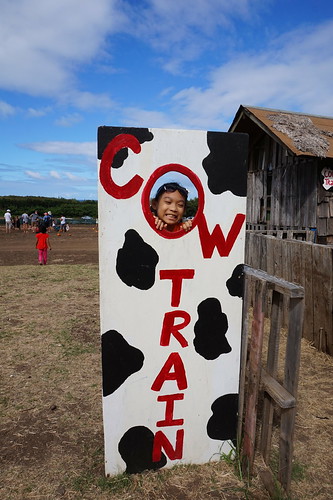 Although we didn’t have to wait in line to get onto the cow train, the golf carts were all taken and there were only the children wagons left.  Fortunately, the train moved very slowly and my aunty and I just walked along side the cow trade.  The entire ride probably took about 5 minutes. 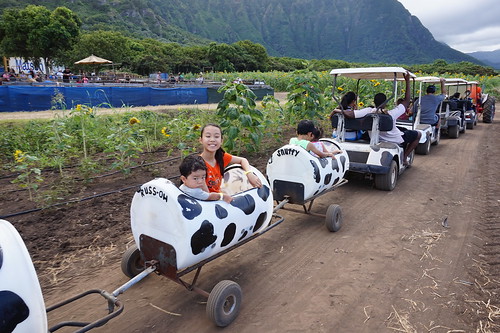 The final activity of the day was walk through the sunflower maze.   Like the other activites, the Sunflower Patch was $3 per person but was also included with the wristband 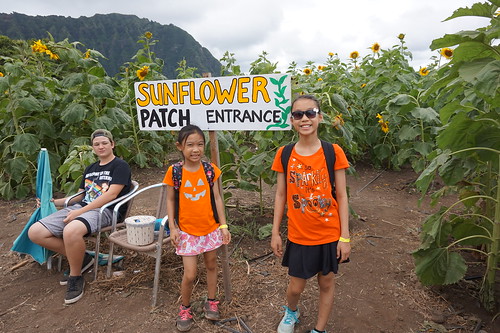 Overall, I think that the $3 admission price was worth it because when else will you have the opportunity to walk through an entire field of gigantic sunflowers?  I think some flowers were at least 10 feet tall because they were over double my height. 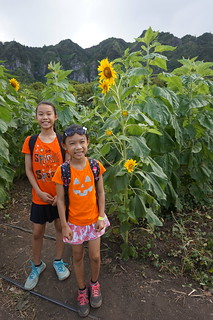 I think most people would be able to finish the sunflower maze in about about 10 minutes if they don’t cheat and cut through the sunflowers.  We took about 15 mintues because we stopped to take pictures every so often and managed to get lost at one point and had to retrace our steps. 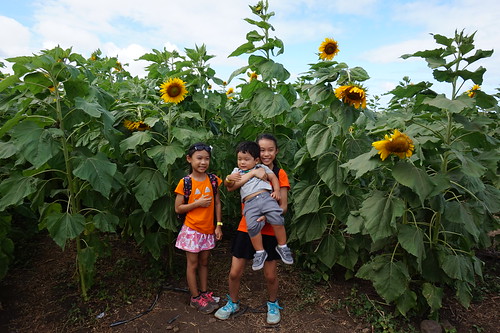 I was pleasantly surprised that Connor enjoyed walking on the uneven terrain between the sunflowers and managed to walk the entire sunflower maze.  It was great for me because I expecting to have to carry him throughout the maze. 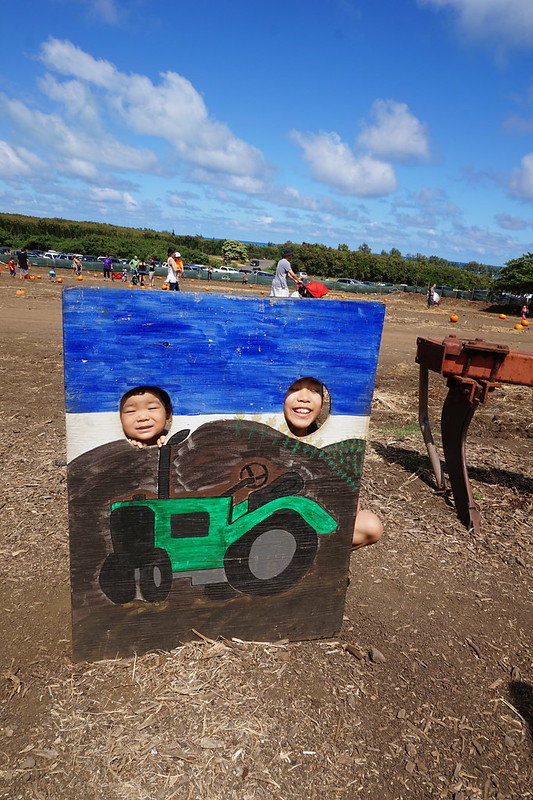 After the sunflower patch, we bought some food.  I thought the food prices were pretty reasonable  – $2 hot dogs, $4 hamburgers with lettuce and tomato, $3 fresh corn on the cob, $3 french fries, and $1 water.  The corn (picked that day) was delicious.  We also bought strawberry lemonade and sweet tea which came in large mason jars. 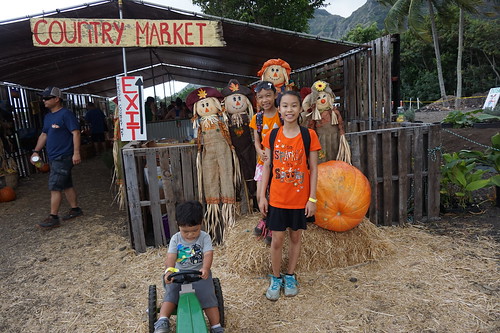 We ended our trip with a visit to the county market where we bought a few bags of green beans ($2/bag) and a $5 kabocha pumpkin.  Overall, I would come back to the farm again next year.  I would recommend bringing sunscreen, closed toe shoes, a camera, and a lot of water. 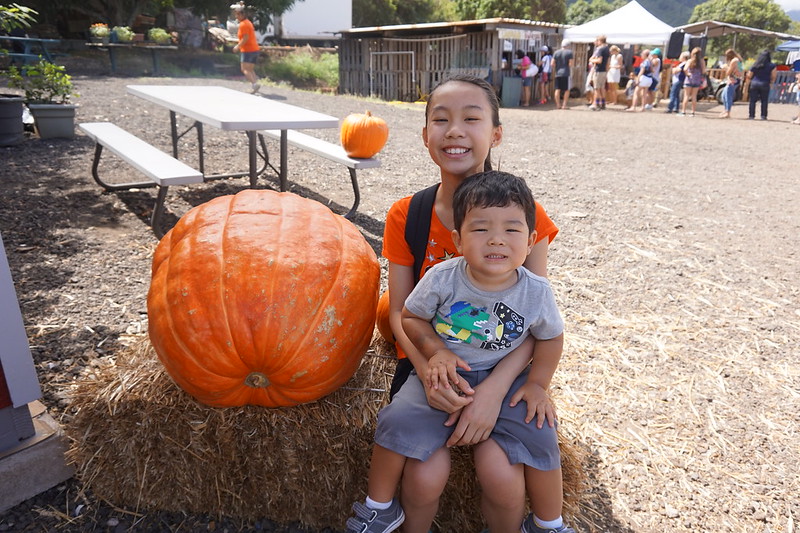 This year, Connor dressed up as Aladdin and my friend Tasha’s daughter dressed up as Princess Jasmine.  The initial plan was that we were going to meet up to go trick or treating in the Waikele Outlet mall like last year.  Unfortunately, Ev and I both were not able to leave work early enough to get out to Waikele before the event finished at 7pm due to the traffic.  Hopefully Aladdin and Jasmine can be united soon.

As a consolation, we took Connor trick-o-treating for the first time.  We only went to about two dozen houses on Ev’s parent’s street, but Connor had a lot of fun going door-to-door, helping pass out candy, and watching the other children trick-o-treat.

I hope everyone had a great Halloween.