We were fortunate to have Ev’s parents with us for the beginning portion of the trip while we were in Tokyo.  Ev and I decided to take advantage of the available babysitters and had a nice night out in Tokyo with just the two of us. 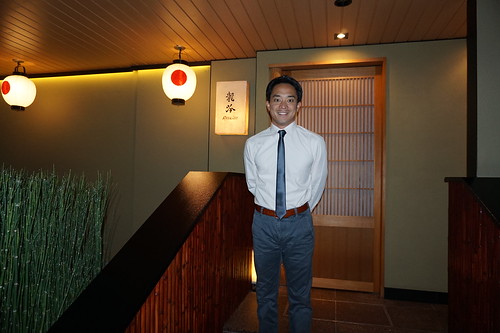 For our one night of freedom, we knew we wanted to splurge on an amazing meal.  After researching all 13 three-Michelin star  restaurants in Tokyo, we decided to eat at RyuGin, a restaurant known for its Kaiseki, a traditional multi-course Japanese dinner. We decided to eat there because in addition to earning three Michelin stars, RyuGin was named one of the World’s 50 Best Restaurants by the Diner’s Club every year since 2011. 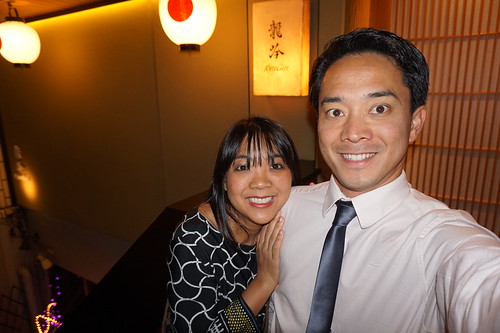 I should first mention that getting reservations here was a little difficult from the US.  First, they do not have an online reservation system so you have to call to make a reservation. Second, if you are not a resident of Japan, then the only way you can book the restaurant is by going through a third-party reservation company or going through your hotel’s concierge service. Fortunately, we had booked our Tokyo hotel well in advance so we were to ask our hotel to book our reservations.  Now on to the food! 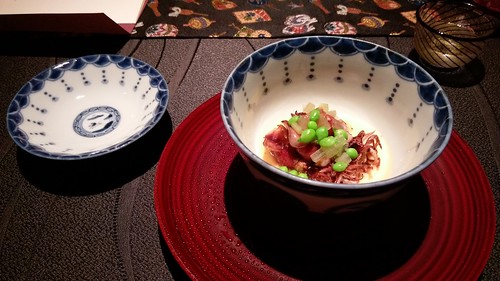 Our meal started with two appetizers in quick succession. The first appetizer was a a Firefly Squid Dish with Butterbur and Young Pea. Ev was a big fan of the tiny, charcoal broiled firefly squid that had a nice slightly smokey taste. 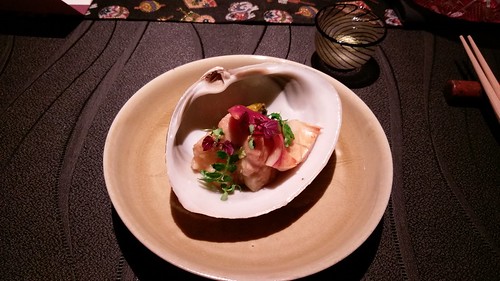 The second appetizer was a Hokigai surf clam that was plated on an abalone shell with shiso and other small green herbs. 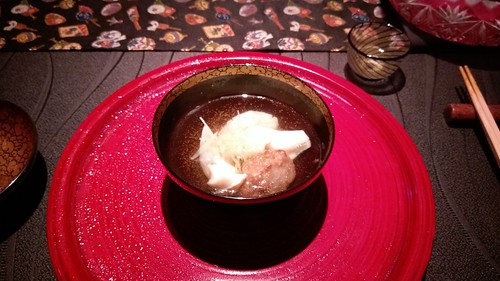 After the appetizers, we had an Owan Soup course, which comprised of Greenling fish, Lotus root dumpling, and Junsai in a light Ichiban Dashi. I had never had Junsai before and it had a very interesting texture. It was crunchy but had a crunchy jelly like coating surrounding it. 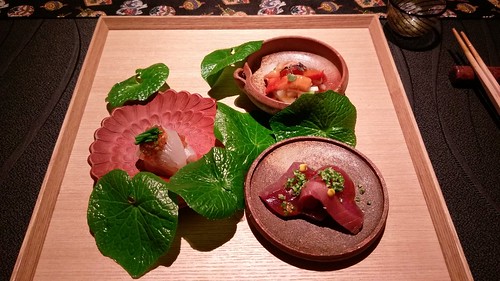 The next course was our sashimi course, which contained three different types of sashimi – a red clam and squid sashimi, a white flatfish sashimi, and a katsuo sashimi.  I really enjoyed the Katsuo (skip jack tuna)  which was a really nice, fatty tuna. 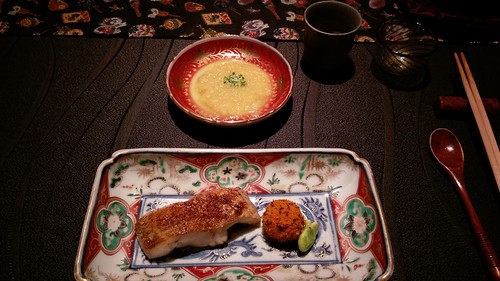 Then came the grilled course, which was a grilled sea perch with a taro potato dumpling accompanied with a mustard vinegar sauce. 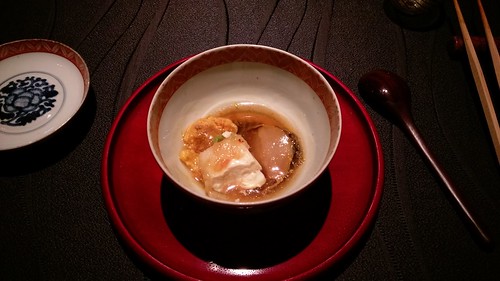 After the grilled dish came the stewed dish, which consisted of a fried Goemon Tofu, uni, and abalone in a rich bonito consume broth with a slight hint of citrus.   We were told that the abalone had been simmering in the broth for approximately 10 hours.  This dish seemed very simple, but very satisfying. 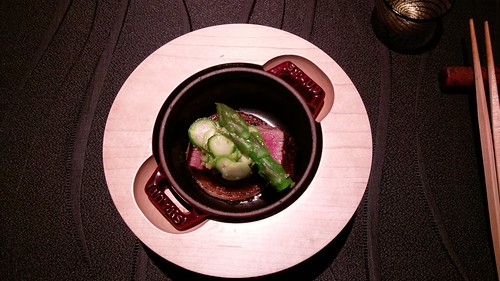 Our next dish was our meat course of Sanuki Olive Beef from the Kitagawa prefecture resting on top of a beautifully carmelized onion topped with asparagus.  The beef was very good but the onion underneath made the dish. 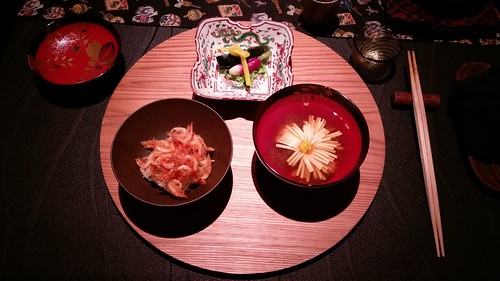 Or final dish before desert was the rice dish.  The course came with a small bowl of rice flavored with cherry blossom tea with tiny Sakura shrimp, picked vegetables, and a “Chrysanthemum” Soup.  The flower in the soup was actually a piece of egg custard that was elegantly cut to look like a Chrysanthemum flower.  Unbelievable. 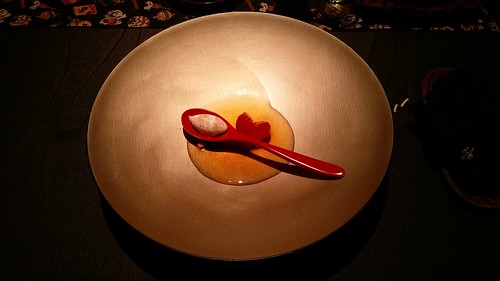 The first dessert course was a single strawberry simmered in a light brown sugar syrup with a small spoonful of sakura ice cream. 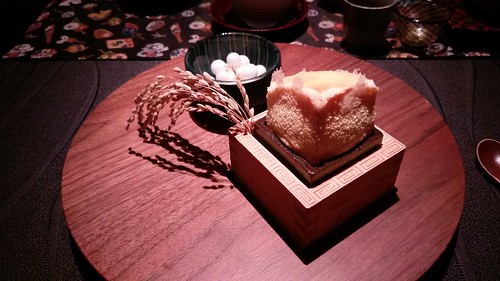 The second dessert dish was a hot sake souffle with a cold sake ice cream.  This was by far my favorite dish of the night.  The souffle was seriously delicious.  It was warm and custard-like in the inside and crunchy and sweet on the outside. 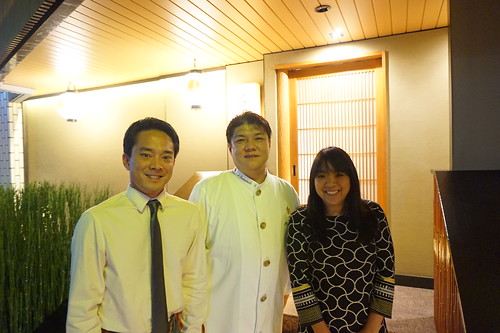 As we were leaving, we bumped into Chef Seiji Yamamoto and thanked him for the meal.  He also graciously agreed to take a picture with us.

Overall, we both enjoyed the meal and the food was very pretty.  But, we thought that the service was just okay considering how difficult it was to get reservations and the cost. We honestly don’t recall exactly how much we paid for our meal (I joke that it cost so much that we’ve blocked out all memory of paying our bill), however the meal plus sake cost us approximately $300 per person.  If I were to visit Japan again, I would probably won’t revisit again and would try another of the three-star Michelin star restaurants in Tokyo. 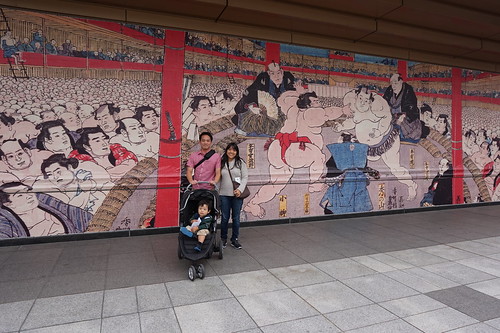 One of the highlights of our Japan trip was seeing a sumo wrestling tournament at the Ryogoku Kokugikan (sumo stadium) in Tokyo.  I learned that the Japan Sumo Association is only in Tokyo for 3 months of the year (January, May and September), so we were super lucky to be in Tokyo at just the right time. 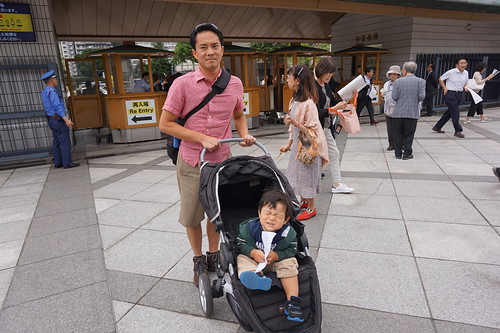 The Ryogoku Kokugikan sumo stadium has two floors.  The first floor comprised of ringside and box seats, which are classified into three classes A, B, and C, depending on the distance from ring. Majority of the box seats are for 4 people, but there are some that are for 2 or up to six people.  The second floor comprises of rows of Western-style theater seating.  These seats are also divided into A, B, and C classes depending on the distance from the ring.  Ev’s parents didn’t think that they could sit on the floor the entire day so we elected to buy Class A theater seats on the second floor. 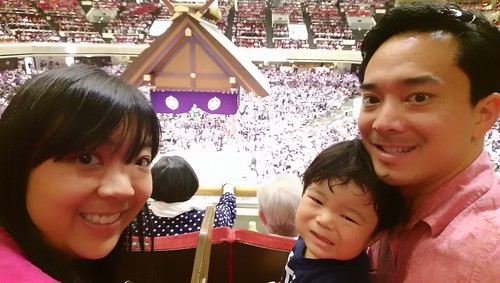 I would highly recommend purchasing tickets in advance because I’ve been told that tickets often sell out by the day of the event.  I purchased tickets on the day they went on sale, so I was able to get really good seats in the second row of the A class seats.  I purchased my tickets on the Ticket Oosumo – the official English online ticketing site for sumo -http://sumo.pia.jp/en/.  They charge a $10 fee for each ticket, but it was very convenient, and I was able to pick up the tickets at the will-call kiosk at the entrance.   The tickets ended up being 9,500 yen per person and well worth the price. 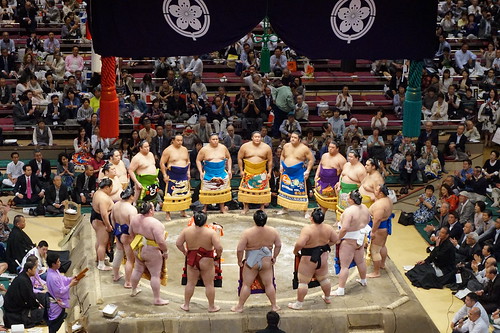 Although the tournament officially  started at 8:30 with the lowest ranking sumo wrestlers competing first and ending with the highest ranked wrestlers at around 18:00, we got there at around 13:30.  Most people arrived at the stadium between 14:00 – 15:00.  Watching sumo was surprisingly entertaining.  Even though the actual round often only lasted a few seconds, there was always something interesting to watch.   I would really recommend reading up on the basics of sumo so that you have some idea what you’re watching. 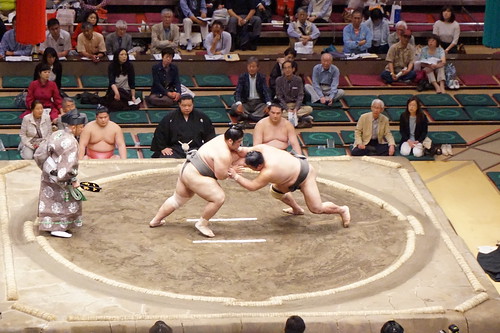 Finally, no sumo visit would be complete without a visit to a Chanko nabe restaurant, which is a staple food for sumo wrestlers.  Chanko nabe is a hot pot dish that contains vegetables, seafood, and meat.  Prior to our visit to the sumo stadium,  we ate at Chanko Tomoegata, which was about a 10 minute walk from the stadium. 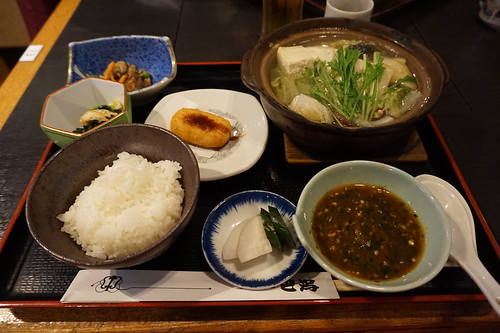 I ordered the lunch set which included a bowl of chanko nabe, rice, potato croquette, three different tsukemono sides, and a shoyu-miso sauce, which we added to the soup base, all for about 2,000 yen.  Overall, the Chanko nabe had a very mild soup base and was comforting to eat. 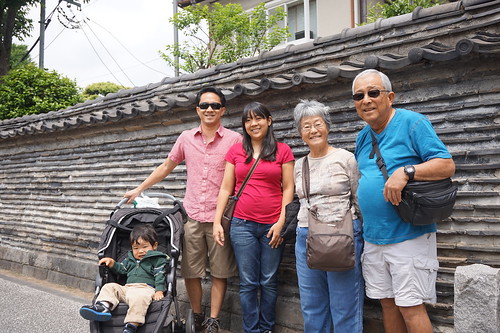