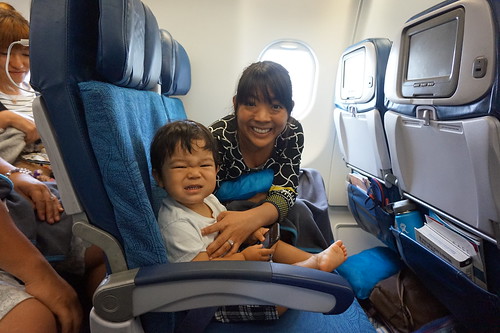 Ev and I decided to take a trip with Connor before he turned 2 to take advantage of Connor’s discounted plane ticket for one last time.  Since we knew this would be our last trip for a little while, we decided to “go big” and took a 16 day family vacation to Japan. Our first day and a half of our trip was spent on the airplane ride from Hawaii to Tokyo.  We left Honolulu International Airport at around 6 p.m., Thursday night, but because of the time zone difference and the 8 hour flight, we arrived in Haneda Airport in Tokyo at around 10 p.m. on Friday. 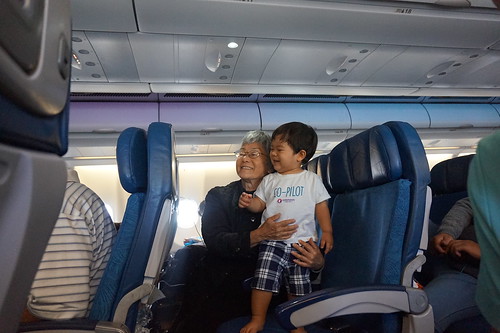 Connor has been on a plane before, but our last trip was almost a year ago and Connor was much less mobile back then.  In addition, that flight was a shorter day flight to the mainland while this was going to be an over 8 hour, red-eye flight and we had no idea if he would sleep at all.  Ev and I armed ourselves with plenty of bribes (ear plugs, macadamia nuts, and candy) for the passengers in the rows around us, and we hoped for the best. 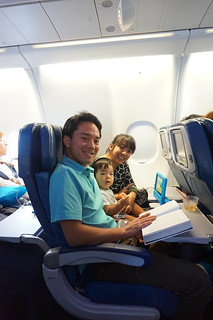 Overall, Connor did alright.  Not great, but I’m sure it could have been much worse.  At first, Connor was having way too much fun playing and looking around that refused to go to sleep.  After a few hours, we had to force him to lie down, which he didn’t like at all.  In the end he probably cried off and on for about 20 minutes before he finally fell asleep for good.  Ugh.  Fortunately, he wasn’t the only crying baby on the plane so I didn’t feel as bad.  We were also super lucky that our area of the plane was only half full and the middle row seats in front of us and behind us were empty.  We promptly monopolized the area shortly after take-off.  Ev slept in our original seats, and Connor and I shared three seats in the middle row to the right of our original seats. 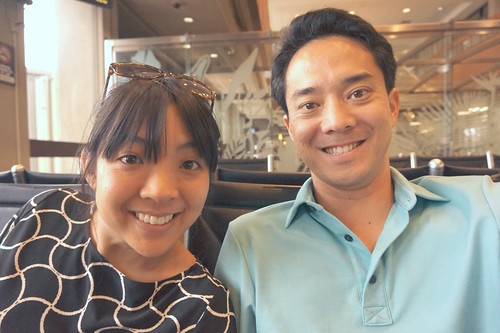 When we arrived in Tokyo, we got our bags, passed through customs fairly quickly, jumped in a taxi, and  arrived at our hotel, The New Sanno hotel, which is a military hotel in the Hiroo area.  For the first 5 days of our trip, we were fortunate to have been traveling with Ev’s parents, who were able to sponsor our stay at the hotel.  The hotel rates were very reasonable too – $76/night!  By the time we reached the hotel, I was so exhausted that I fell asleep as soon as my head hit the pillow.

I had great aspirations that I would draft and schedule a bunch of blog entries to post while I was away on vacation.  Then things got busy at work trying to finish everything so that I could go on the vacation, and before I knew it, we were on a plane to Japan.

Everett, Connor and I had an amazing trip, and I am so fortunate that we both have jobs that give us vacation time to take trips.  Now that we are back, I had hoped to blog all about our travels.  Unfortunately, the hard drive that I had saved many of the pictures to decided this very moment time to die, and some of my photos from my trip, plus many of the photos I have taken over the last year might have been lost.  I know this is entirely my fault in that I should have been saving my photos on multiple drives and/or the cloud before I deleted them off of my camera.  Lessons learned, I guess.  However, it does not make the situation suck any less.

Everett is hopeful that we can take it in somewhere and have the drive professionally recovered.  I am skeptical, but we shall see.  Hope tomorrow brings better news.