A few weeks ago, Ev’s former co-worker, Breann, gave us courtside tickets to one of the UH volleyball games.  The offer was too good to pass up, and we decided to make it a date night. 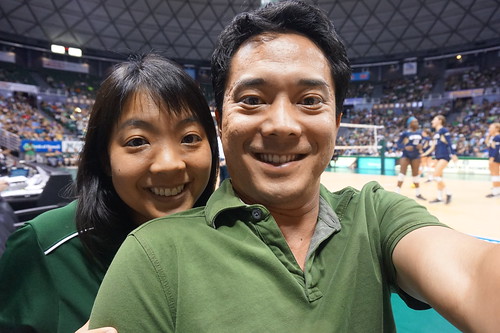 My brother Darren graciously agreed to watch Connor, so Ev and I got to sneak away.  It was the first night we had to ourselves that was not work related in a very long time.  It was nice to get out, just the two of us. 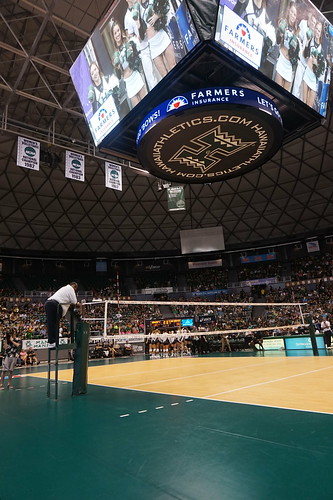 We honestly had the best seats in the house and I am forever spoiled. Check out the view from our seats!  🙂  Amazing!  In addition to the courtside tickets, we also had access to the VIP lounge area, which opened about an hour prior to the start of the game. 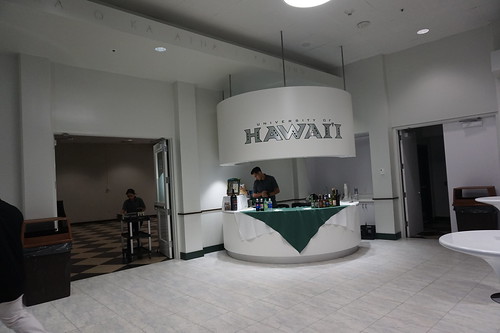 At first, I was a little disappointed that I wouldn’t able to eat nachos, but the spread at the lounge was pretty good!  The menu consisted of Kalua pig sliders, spring rolls, furukake fries, watermelon, and lemon bars. 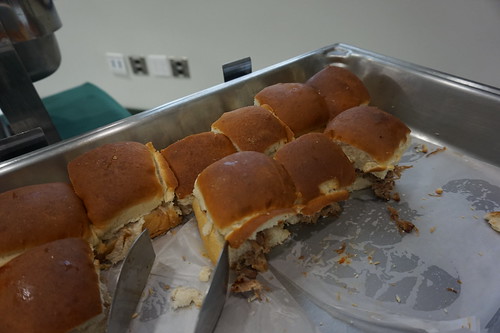 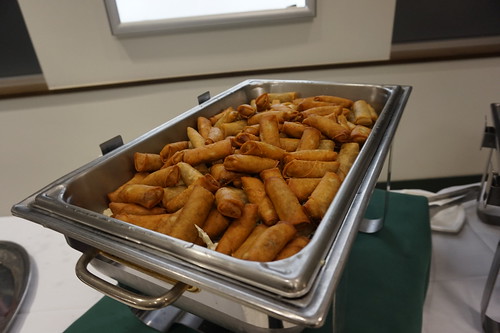 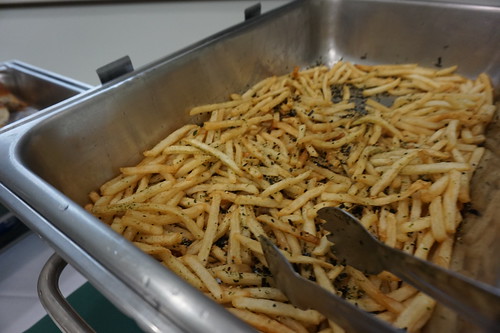 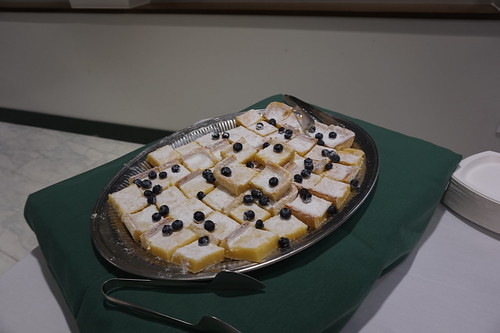 We also had a lot of fun behind the scenes.  We were kind of embarrassing. 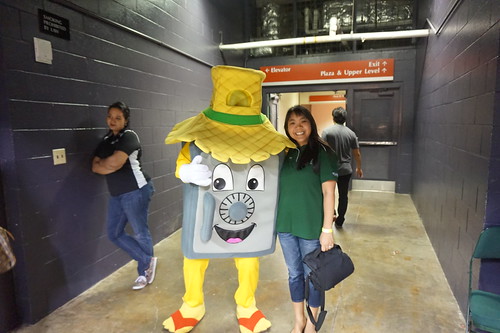 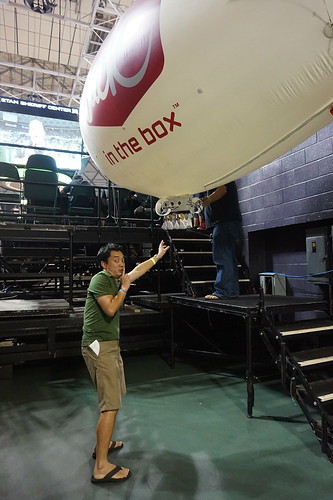 The Wahine volleyball team handily beat UC Davis in three games (25-14, 25-12, 25-17). I’d say the biggest disappointment was that the game end so quickly.  I am so grateful for Breann and it was so fun to feel like a VIP for a night. 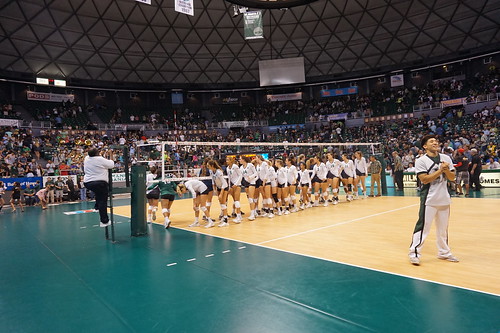 This weekend was Ward’s annual Festival of Giving, which is just a big excuse for the Ohta family to go shopping.  It also gave us an opportunity to eat at Mexico Cantina, which was giving a 25% discount on food for the festival. 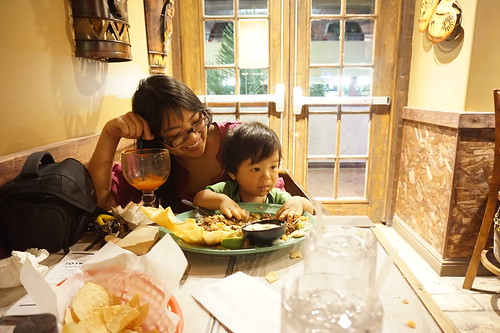 I ordered the Tostada Ranchera with shredded beef ($13.95) and a li hing mui Margarita ($10.00).  The margarita was tasty and a perfect end to a long work day.  The salad was fine, but nothing special.  I wish it had a little more lettuce. Connor really enjoyed the shredded beef and picking out all the olives (see above). 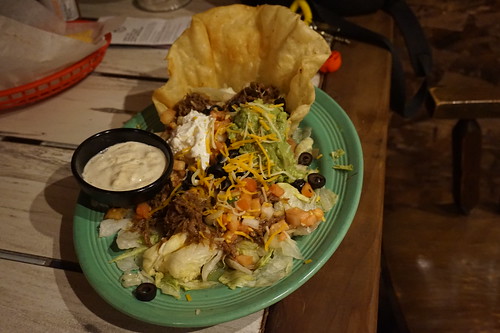 Everett ordered the Adobada Burtrito ($15.50) and a Modelo Especial ($7.00).  I don’t care for pork adobo so Everett didn’t share his burrito with me.   However, he must have liked it because he’s ordered it before. 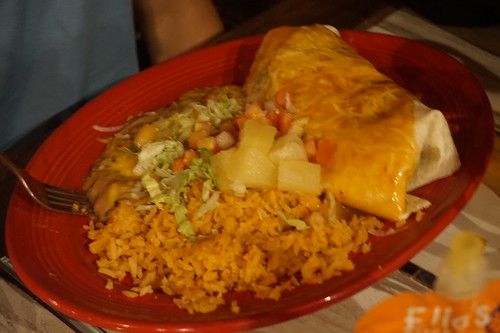 Overall, a really nice night with the family.

For Halloween this year, Connor paired up with his pal Lily to form the ridiculously cute Flintstone’s couple, Pebbles and Bam Bam.  How adorable are they!?

I couldn’t find a suitable Bam Bam costume at any local costume store, so I ended up sewing one up out of four t-shirts (orange, black, brown and white), an elastic band, and a bag of cotton balls.  Not to toot my own horn, but I thought I did pretty well, especially considering my lack of sewing skills.

One strange observation – Pebbles is always in shorts, while Bam Bam is in always in an orange skirt. It worked for me since skirts are way easier to sew than shorts.  Tasha did a good job with Lily’s costume as well.

I was hoping that Halloween would be easier since it fell on a Saturday this year, but in some ways it actually made it more complicated.  We started our day at a UH football game tailgate.  Then, after the tailgate, we left Everett at the football game while Connor and I went to meet up with Natasha and Lily at the Waikele Premium Outlets, where we went trick ‘o treating from store to store.

One of my coworkers warned me that he took his son to Kahala Mall one year and it turned out to be the “worst decision ever” because there were so many kids that they spent majority of time waiting in lines after lines for candy.  I was a little worried that Waikele would be the same way but fortunately Waikele had just the right amount of kids and the shops were far enough apart that we didn’t have to wait in any lines.

I don’t think that Connor knew what was happening, but he made an awfully cute trick o’ treat-er.  Overall, it was surprisingly fun and we are already thinking about next year’s costume.

Late last month, Connor made 16 months.  Seriously, where did my baby go?!  Overall, October 2015 was an eventful month for Connor.

The biggest change was that Ev’s parents want on a vacation, so we had to send Connor to a full time babysitter for little over three weeks. This was the first time Connor would be going to a sitter for an extended period of time, and I was nervous how he’d react. Fortunately for us, he took it surprisingly well. In fact, on the first day, he went to the babysitter without any hesitation and waived bye to me. *tear*

Other notable firsts for the month include learning to walk backwards and going to his first football tailgate of the season.  Connor’s a lot more interactive now and its been a really fun time for us.  Most of the time, he’s a really happy, playful baby.

Connor is also getting better at vocalizing. So far he can consistently say the following words: