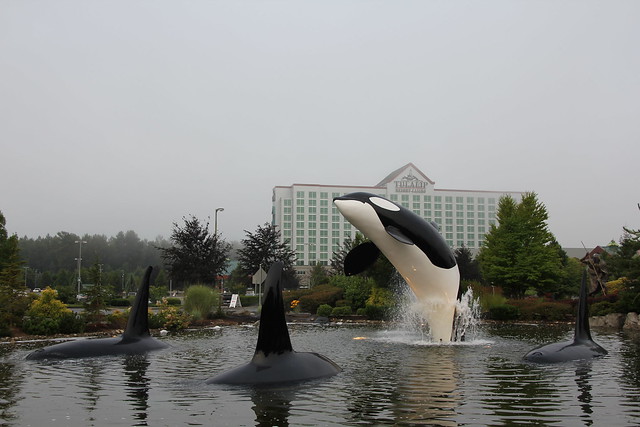 For the first three nights of our trip, we stayed at the Tulalip Resort Casino located about forty-five minutes to an hour north of downtown Seattle.  Ev and I weren’t expecting anything, so we were pleasantly surprised with the accommodations. 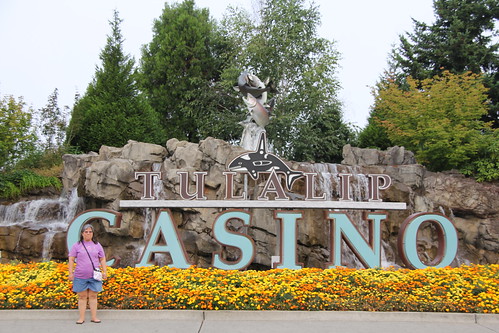 First, the hotel room was very spacious. Compared to the small hotel rooms we are used to Hawaii, our hotel room at Tulalip easily fit the king sized bed and crib. I was also glad that the crib was already set up for us in the room when we arrived at the hotel room because it was already past Connor’s bedtime by the time we got to the Casino. 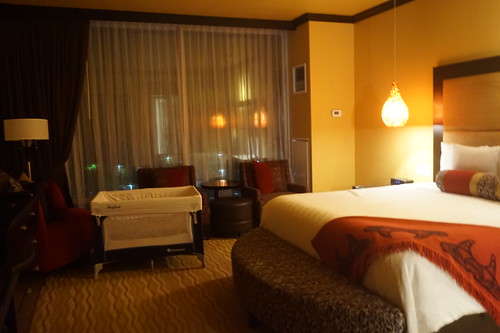 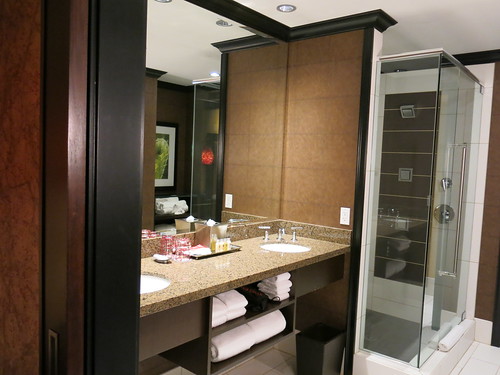 My only complaint was that there was no refrigerator in the room.  There was a mini bar, but it was one of those mini-refrigerators where you can’t put anything else in them. I wouldn’t normally have cared, but we had brought breast milk for Connor just in case Connor was hungry in an area not conducive to breastfeeding.  We didn’t think it was worth spending the $30 a night to rent a refrigerator from the Casino just to save the relatively small amount of milk that we had packed. So, we stored the milk in a boatload of ice the first night and tried to feed most of it to Connor on the first day in Seattle and dumped the rest.

Overall, it was a nice hotel and I wouldn’t mind staying there again.  Also, I’m not sure if they give this to all people who stay at there or if it was some deal with the tour group, but we also got free breakfasts for all three days we were there and a free buffet dinner, which was pretty awesome.

Late June and the first half of July has been so busy for the Ohta family that I haven’t had time to post very much over the past four to five weeks. All of our time and energy has been pretty much taken up by preparing for Connor’s first birthday party and then our first family vacation from July 8th to 19th. It’s been a hectic few weeks, and I’m glad everything is finally getting back to normal. I promise that more posts regarding the party and trip will follow shortly.

Connor is makes 13 months in a few days, so I figured it would be a good time as any for a Connor update. The biggest change for Connor over the past month is that Connor has decided that he no longer wants to eat baby food. All of a sudden, one day Connor just decided that he was done with baby food. Lips pursed, head shaking, flat out refusing to eat anything from a spoon.

We tried everything we could think of to get him to eat baby food – we tried reasoning with him (“Connor, you need food to help you grow big and strong”), begging him (“one bite, pleeeease”), bargaining with him, but with no success.  We  tried withholding snacks but that led to a very unhappy, starving kid and when we tried forcing him to eat, he learned that he could just spit it out. Needless to say it was a very difficult week or so and there was a lot of crying involved (on both sides).

In the end, Connor’s will not to eat baby food exceeded our will to fight with him any longer.  We let him feed himself now by putting 4-5 healthy bite size options on a plate and letting him have it.  Mealtimes take at least twice as long, he makes a mess, and more food ends up on the floor than in his belly, but at least he’s eating and he’s happy.  Connor’s current favorites are string cheese, bread, pork chops, blueberries and watermelon.

Connor has also finally mastered the skill of turning around and scooting off the bed/couch feet first. This is such a relief because we can stop worrying about him tumbling off of things head first. Connor rolled off the bed once and we freaked out. We rushed him to the emergency room like idiots. The doctor looked at him, said he was fine, and sent us home. What can I say first time parents right?

Anyway, Connor spends most of his day eating, sleeping, and playing with all the new toys he got from his birthday.  Connor’s still not walking, but I’m not really as worried as I used to be because I know he’s happy and healthy. And like crawling, even though he takes a little longer than most to do it, he’ll do it eventually. Right now, he’s really good and quite content at cruising and can shuffle from one piece of furniture to the next with ease. Ev and I are also savoring these moments while we can because Connor will be running around very soon, and I’ve been told it gets 10 times harder from there.

More posts about our trip and birthday party shortly! 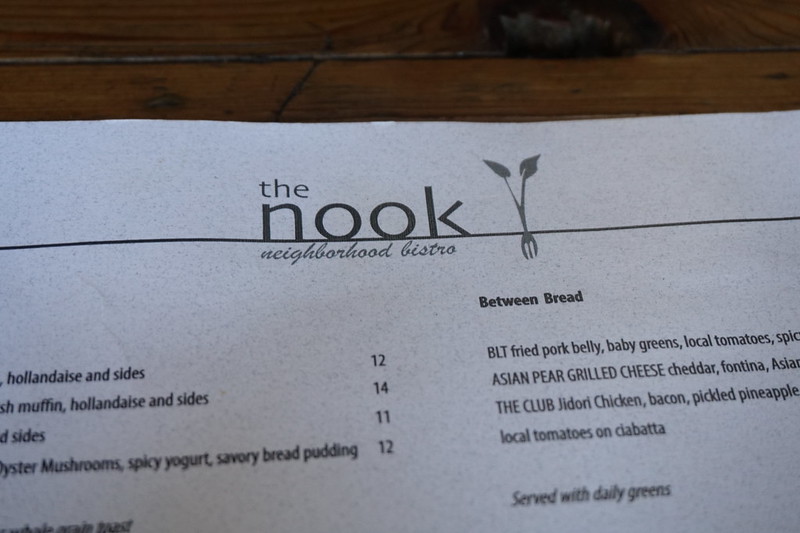 Ev and I are always on the lookout for new breakfast places.  So, when we heard great reviews about The Nook Neighborhood Bistro from Ev’s brother, we decided to check it out for ourselves. Located in Puck’s Alley near UH, the Nook serves an assortement of breakfast and lunch dishes featuring local produce, eggs, and meats.

Ev ordered the Pork Belly Eggs Benedict ($14), which came with two eggs benedict with pork belly bacon, a small salad, potatoes, and toast.  We both agreed that the portion sizes were very good considering the quality of the ingredients and the price. 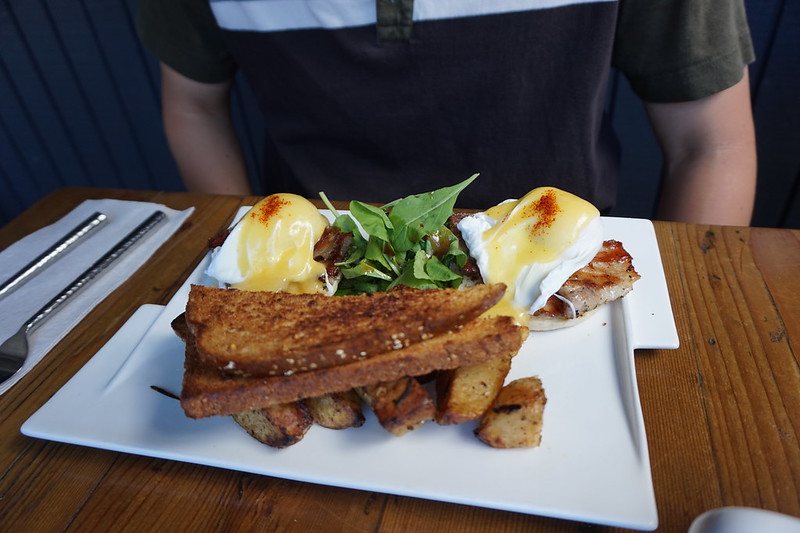 I decided to order the Brekkie Stack ($13), which comprised of cheddar and fontina cheeses sandwiched between two thick slices of french toast, topped with two sunny side eggs and two strips of bacon.  I’ve never had cheese on my french toast before, but it was amazing.  The photo does not do this dish justice. 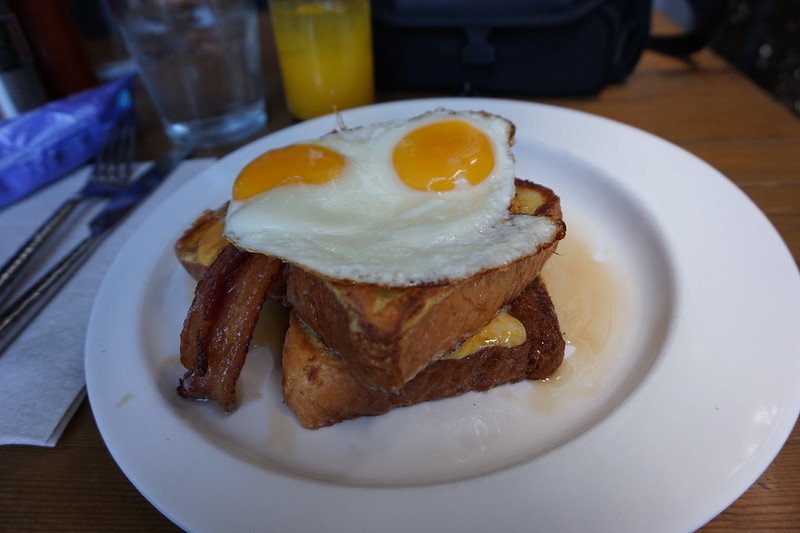 At the end of the meal, Ev said that he likes this place better than Scratch Kitchen and Bake Shop.  Very high praise indeed!  We will definitely be back soon!